What is a Crannog? 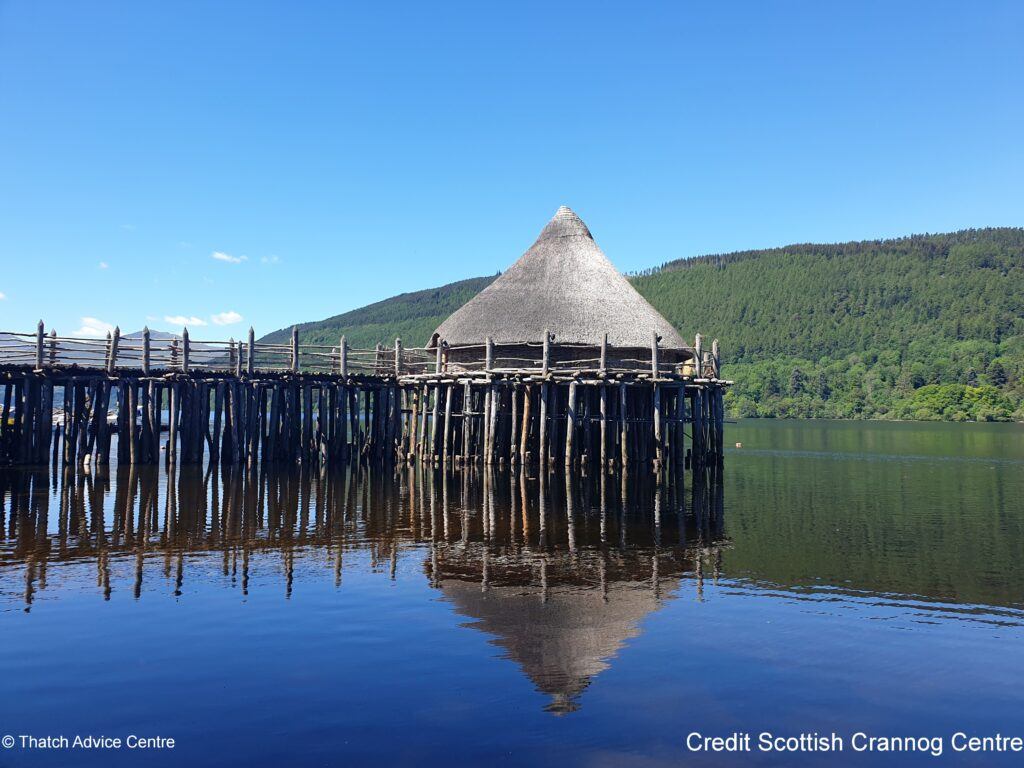 A Crannog is a very ancient dwelling that was generally built in lakes and estuaries, perhaps based on Irish or Celtic roundhouses.  It was an artificial island connected by a man made causeway or footbridge or accessed by boat.  Approximately, 400 Crannog sites have been found in Scotland, around 2000 in Ireland and 1 in Wales, also similar settlements can be found throughout Europe.  Crannogs were used as homes for over five thousand years till the late 17th early 18th centuries and were often built in areas of regional or local significance.  The name ‘Crannog’ comes from the Irish words crann “tree” and og “young”.   We are interested in them as they were thatched.

Where can you find Crannog Information? 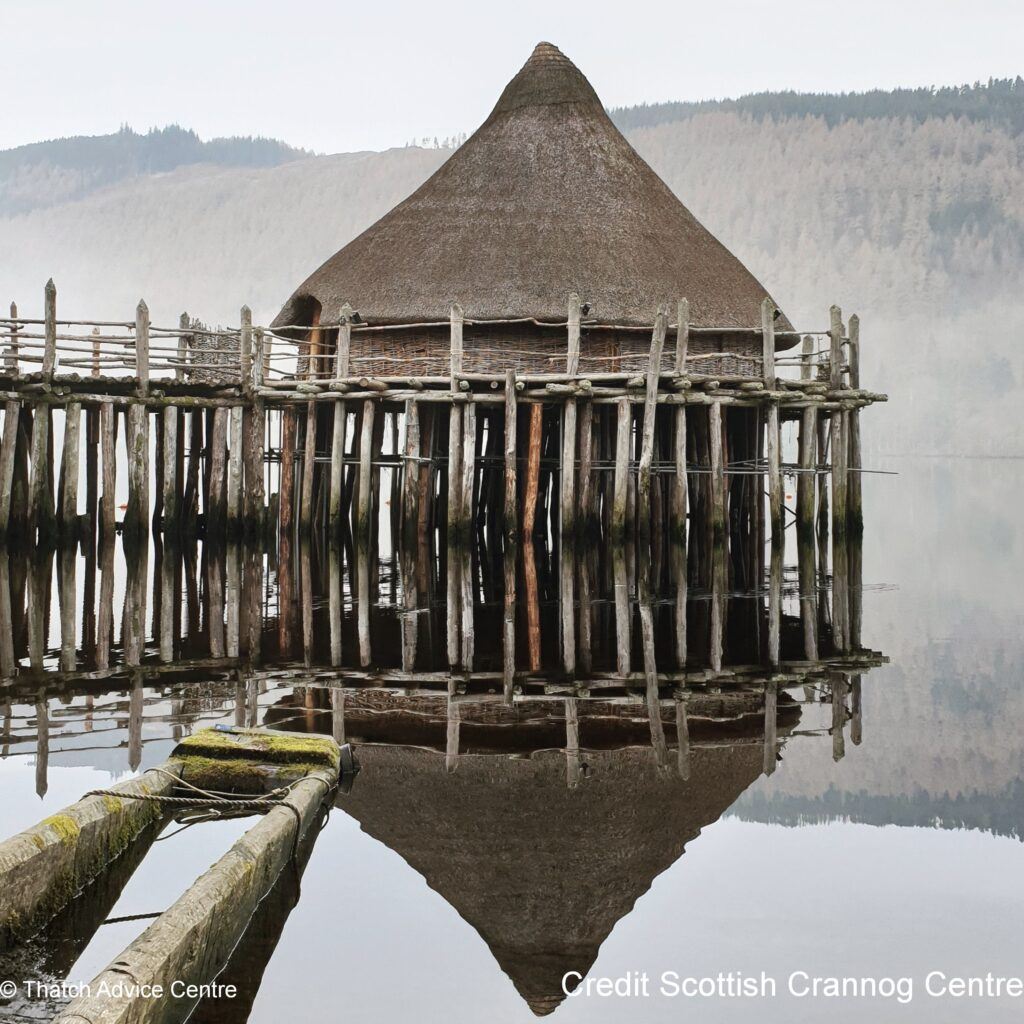 The ancient Crannogs in Perthshire were believed to be built on stilts or piles built into the loch bed, they were roundhouses made of wood.  In dryer areas an island was made out of rocks and a stone house built on top.

The Scottish Crannog Centre on Loch Tay near Kenmore has the Oakbank Crannog.  This Centre was opened after a reconstruction Crannog was built after an archaeological experiment, led by Dr Nicholas Dixon and Ms Barrie Andrian, between 1994 and 1997.

At the Crannog Centre there is the reconstructed thatched Crannog, a museum and a living history area.  They also have replica longboats and living history demonstrations. 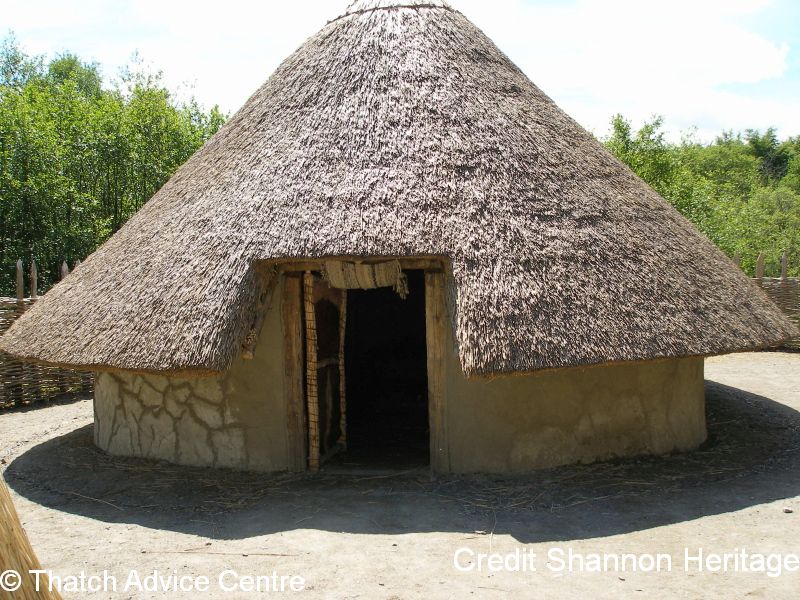 1500 artificial islands or so have been identified in Ireland by archaeologists and historians, most of these are found in the midlands, the west and the north and many more are to be found!  Not many have been investigated at this stage so there is a lot more to learn about them.

As one of Shannon Heritage’s visitor attractions, Craggaunowen Heritage Museum in County Clare, Ireland, has a 16th-century castle and an archaeological open-air museum.  There is a reconstructed Crannog next to the Castle, along with a Ring Fort with thatched round houses as part of the development. 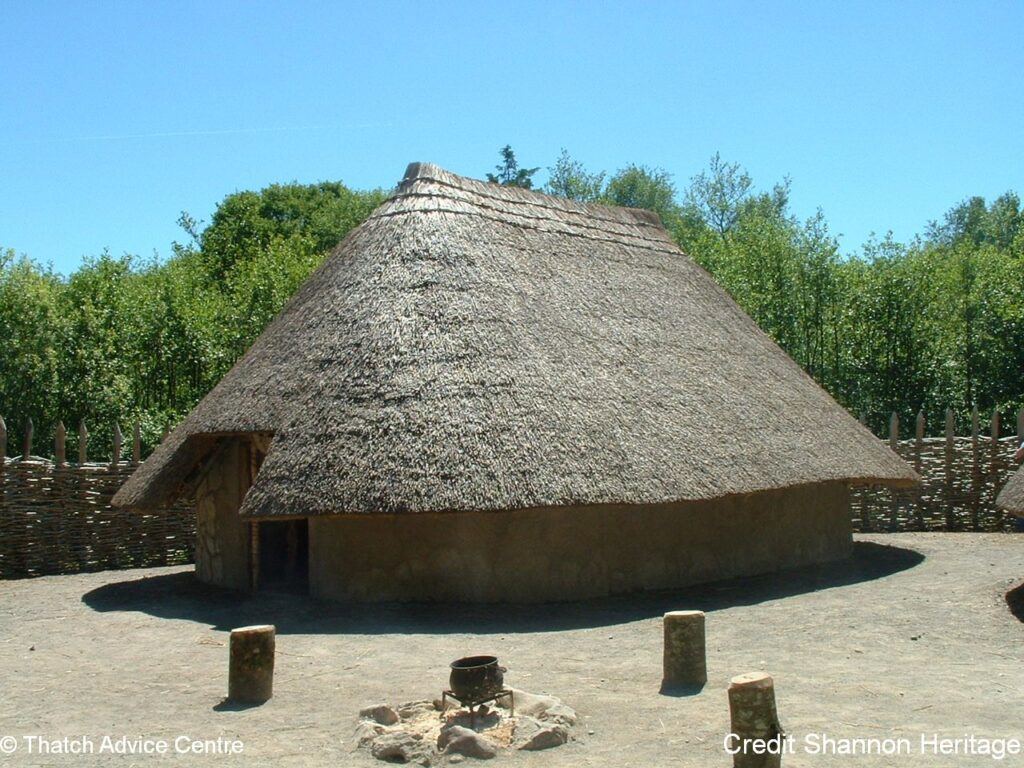 Llangorse lake (the largest in S Wales), near Brecon holds the only ancient Crannog found in Wales.  This Crannog was built in 916 AD probably by the King of Brycheiniog.  Archaeologists from the National Museum of Wales investigated the area between 1989 and 1993. In 1993 the dig was joined by the TV series Time Team!

The Welsh Crannog Centre is built on this site.   A viewing platform goes out into the lake and is also used as an information centre.  You can walk along the causeway to a traditionally thatched roundhouse with views of the Crannog, Llangorse lake, the Black Mountains and the Brecon Beacons. 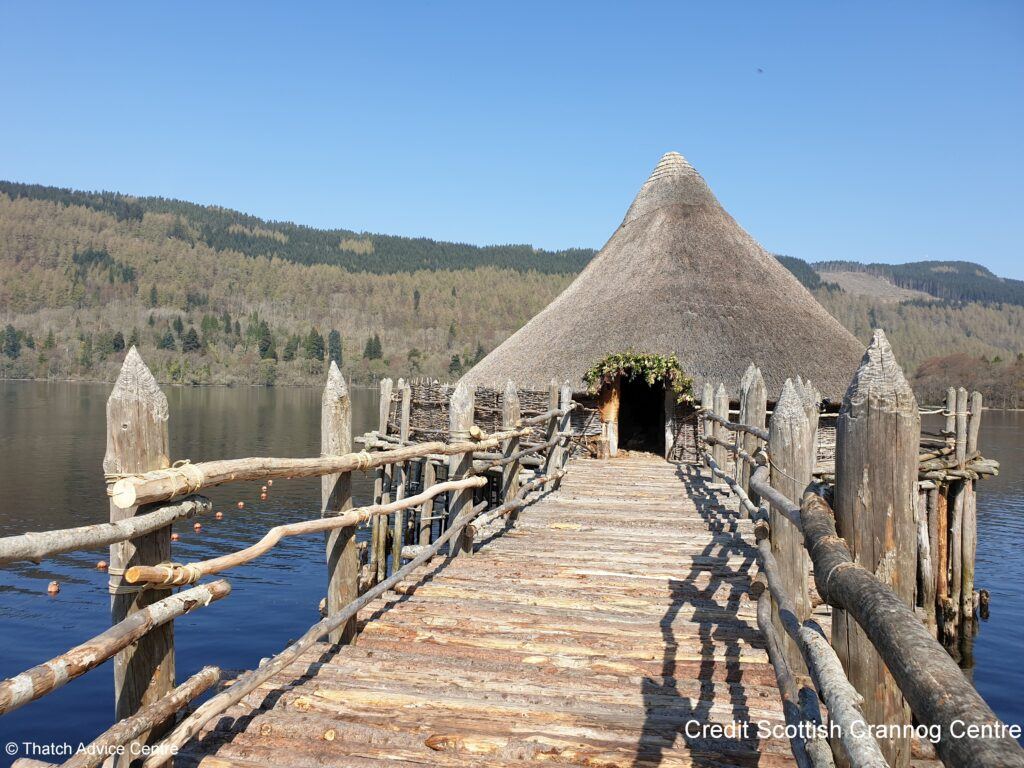 The thatched roofs of the Crannogs were most important.  This would protect the inhabitants as well as the crannog from the harsh weather.  The angle of the roof was crucial to stop snow from lying and also rain from getting inside.

At Oakbank Crannog the local bracken, rushes and or straw could well have been used to thatch the original dwelling.  For the reconstruction Water Reed was used from the river Tay fixed with ties and also using hazel spars, as are used on current thatched roofs.

Ring beams supporting roof poles are constructed with hazel purlins tied and notched into the rafter poles.  Modern rope had to be included in the fixings to comply with current regulations in the reconstructions. 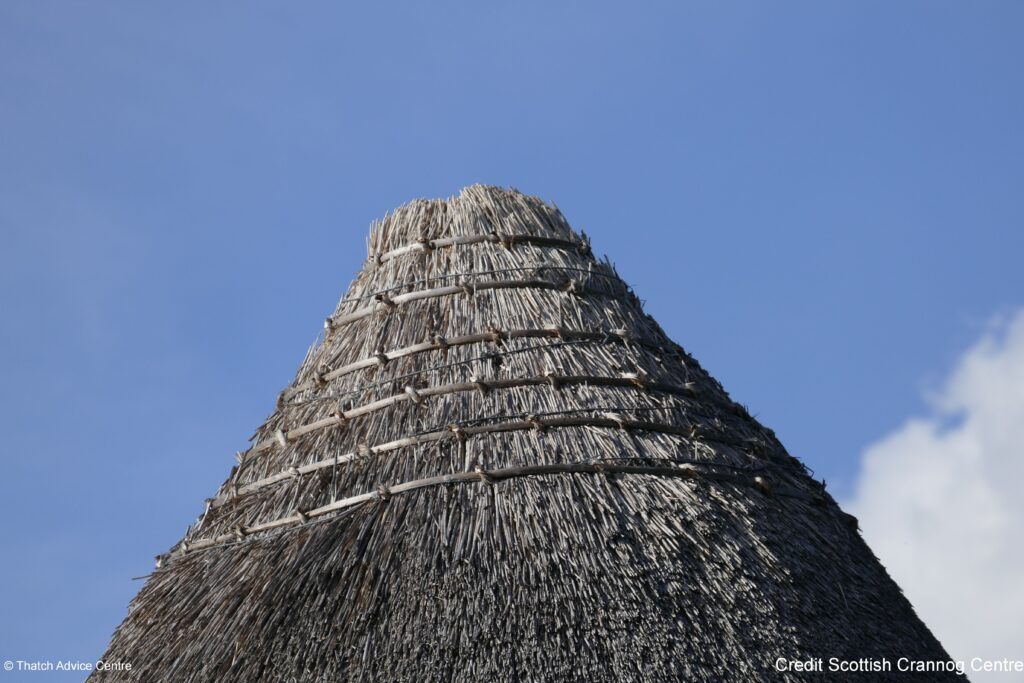 Crannogs are examples of ancient dwelling and settlements with thatched roofs.  They provided moated residences, fortresses, prisons and even places for weapons to be stored.

The locations which have been archaeologically investigated and since then reconstructions created are well worth a visit.  Some of the sites have a lot to offer with visitor centres and even re-enactment of past times and special events.   Let us know if you have visited any of them and send in your pictures.

With Thanks to the Scottish Crannog Centre and Shannon Heritage for the wonderful pictures. 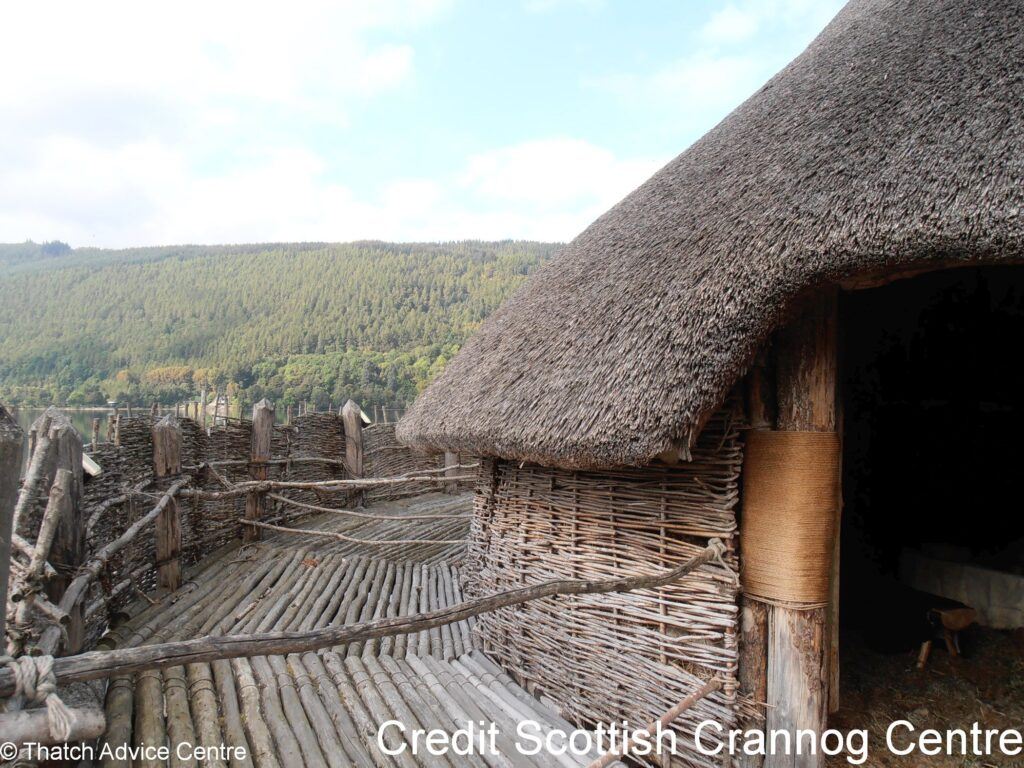